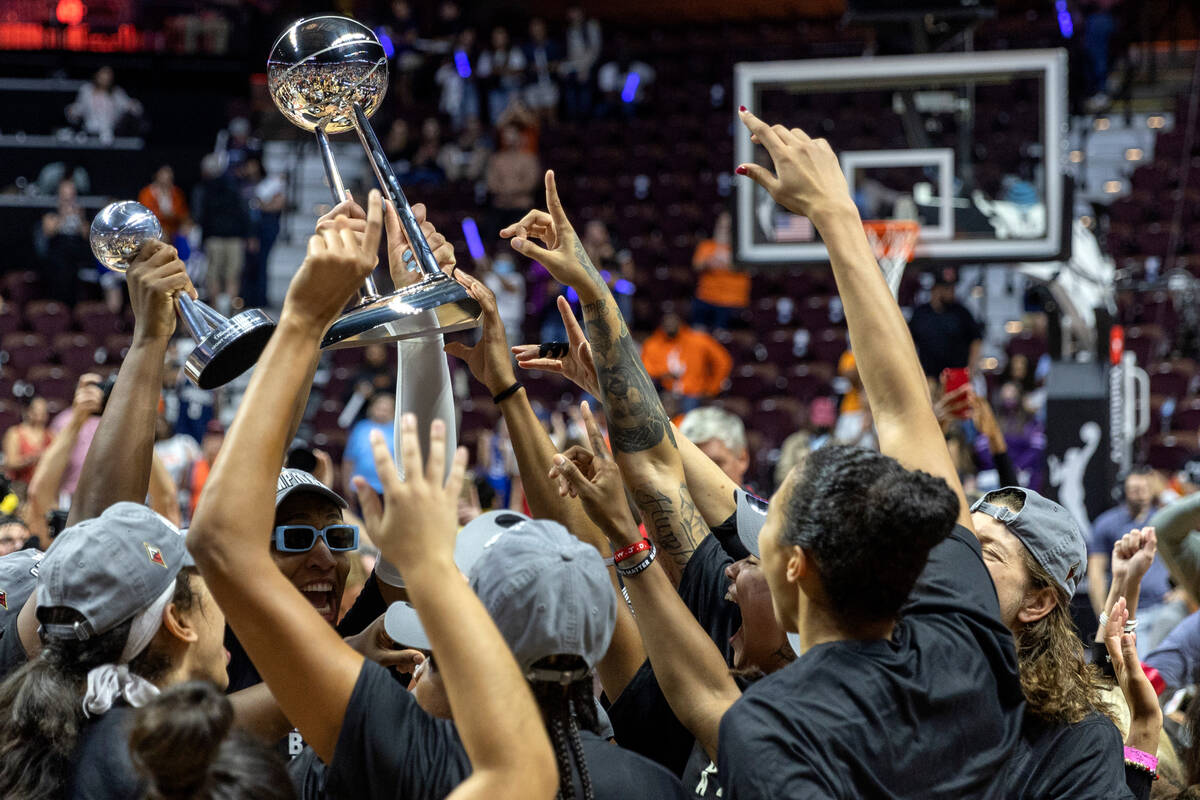 The Las Vegas Aces have won the WNBA championship. History has been made.

The Aces are the first team from Las Vegas to claim a major league professional sports title, the result of a 78-71 victory over the Connecticut Sun on Sunday.

It’s a landmark achievement on the local sports scene. The city welcomed its first major pro team just five years ago in the Golden Knights, who nearly became the first to win a championship, falling in the Stanley Cup finals to Washington in their first season.

But the Aces closed the deal. They were led on the bench by first-year coach Becky Hammon, whose modern-day style of basketball — spread the floor, share the ball and embrace any open 3-pointer — fit perfectly into a team of versatile players.

Hammon would win WNBA Coach of the Year. She also played for the franchise between 2007-14 when it was based in San Antonio, Texas.

The Aces were led on the court by the league’s Most Valuable Player and Defensive Player of the Year A’ja Wilson, whose skill at both ends firmly established her as one of the world’s best players.

The franchise was founded in Salt Lake City and began its journey as the Utah Starzz in 1997. It moved to San Antonio in 2003 and became the Silver Stars and then the Stars. It then relocated to Las Vegas prior to the 2018 season and plays out of Michelob Ultra Arena.

Raiders owner Mark Davis purchased the team from MGM Resorts in 2021, from the beginning championing better working conditions and pay for all WNBA players.

“These women can be such value to our community as a whole,” Davis said. “Get them working with kids and at clinics and making enough money so they don’t have to also go over to Europe to play.

“Did I see winning a championship when I (purchased the team)? I was hoping.”

He got his wish Sunday.

It was the culmination of an impressive run through the playoff bracket by the Aces as a top seed. They first swept Phoenix in a best-of-three quarterfinal series and then needed four games to oust Seattle in a best-of-five semifinal before facing the Sun.

by Rocio Hernandez, The Nevada Independent, August 28, 2022 Excitement filled the air during the first day of the school year at Winnemucca Grammar … END_OF_DOCUMENT_TOKEN_TO_BE_REPLACED

Semi Exact in Minden, Nev. StartUpNV, a nonprofit statewide incubator and accelerator for Nevada-based startup companies, has closed a $600,000 round … END_OF_DOCUMENT_TOKEN_TO_BE_REPLACED

Randy Soule leads a tour of the plant. The project's funding is provided by Nevada-based Greater Nevada Credit Union. By Nicole … END_OF_DOCUMENT_TOKEN_TO_BE_REPLACED

by Jason Hidalgo, Reno Gazette-Journal, July 25, 2022 Redwood Materials is doubling down on its battery facility just east of Reno-Sparks once … END_OF_DOCUMENT_TOKEN_TO_BE_REPLACED

When it comes to Nevada’s most-watched political races, the national pundits have it wrong. Both Adam Laxalt and Joe Lombardo should be clear … END_OF_DOCUMENT_TOKEN_TO_BE_REPLACED

President Joe Biden gave an interview to “60 Minutes” that aired Sunday. Among the newsiest items was the president’s pronouncement that the health … END_OF_DOCUMENT_TOKEN_TO_BE_REPLACED

by Frank Miele, Real Clear Politics, September 12, 2022 As I hinted would happen in my previous column, Alaska’s experiment in ranked choice … END_OF_DOCUMENT_TOKEN_TO_BE_REPLACED