The latest shakedown is a new fund to pay poor countries for supposed damage caused by Western use of fossil fuels.

by The Wall Street Journal Editorial Board, November 20, 2022

The use of climate policy to soak Americans keeps getting worse, and the United Nation’s climate conference in Egypt ended this weekend with agreement on a new fund to pay reparations to poor countries. Welcome to the latest climate shakedown.

Poor countries have long sought to force wealthy countries to pay for the “loss and damage” they suffer from natural disasters that are supposedly climate-related. This is separate from the $100 billion a year that rich countries have promised to help poor countries reduce emissions and adapt to climate change.

The 2015 Paris accord suggested rich countries compensate poor countries for climate damage—the rationale being that industrialization has increased temperatures and led to natural disasters. Poor countries finally forced discussion of a formal mechanism to pay climate reparations onto this year’s U.N. conference agenda.

John Kerry, the U.S. climate envoy, dismissed the idea earlier this month: “It’s a well-known fact that the United States and many other countries will not establish . . . some sort of legal structure that is tied to compensation or liability. That’s just not happening.” But on Thursday Europe abandoned the U.S. by proposing a deal, and Mr. Kerry rolled over.

Wealthy countries will now set up a fund to cover climate damage for the least developed countries—i.e., not China or middle-income nations. This will be financed from “a broad donor base” and “mosaic of solutions,” such as international development banks and taxes on aviation, shipping and fossil fuels.

Europe hopes this will induce poor countries to reduce emissions to meet the Paris target of limiting global warming to 1.5 degrees Celsius compared to pre-industrial levels. The world has already warmed by 1.1 degrees, and a U.N. report last month estimated temperatures would rise 1.8 degrees even if Western countries meet their “net-zero” goals.

But China emits two-thirds more CO2 than Europe and the U.S. combined. Coal accounts for 60% of China’s power generation, and more new coal plants are set for approval through 2025 than the entire existing U.S. fleet. China says it needs more coal power for energy security and, unlike Europe and the U.S., it won’t commit climate suicide.

In return for climate reparations, Mr. Kerry tried to force an agreement to phase down “unabated” fossil fuels. Low-income countries understandably refused since doing so would consign their citizens to poverty. The Biden climate agenda has increased energy prices in the U.S., and the climate lobby doesn’t mind if this misery spreads around the world.

Details about the reparations fund—such as which countries will pay, how much, and which countries will benefit—will be fleshed out over the next year. Biden officials claim the agreement doesn’t create new liabilities for Americans. But the U.S. and Europe are conceding the principle that their emissions cause climate damage even though there isn’t a definitive link between rising CO2 levels and natural disasters such as the monsoon flooding in Pakistan this year.

All of this ignores the benefits for humanity, rich and poor, that economic growth spurred by capitalism have provided. American taxpayers are being asked to pay because the U.S. industrialized first and then lifted billions of people out of poverty via investment and trade.

House Republicans won’t appropriate money for the fund, but the Administration could tap international development banks that the U.S. funds. Next time Democrats control Congress, they will argue that the U.S. has an obligation to pay reparations, as they argued that the Inflation Reduction Act’s climate spending is necessary to meet the Paris commitments.

Countries might also shake down U.S. fossil-fuel producers in their own courts. Climate reparations will merely serve as another form of global income redistribution. The Biden Administration’s surrender shows again that the religion of climate change is progressive penance for the sin of being prosperous.

by Elko Daily, October 27, 2022 Nevada Copper announced that it closed a restart financing package with its key financial partners on Oct. 28. The … END_OF_DOCUMENT_TOKEN_TO_BE_REPLACED

Lilac Solutions, a lithium extraction technology company in Fernley, NV announced on October 19, 2022, that they were selected to negotiate a $50 … END_OF_DOCUMENT_TOKEN_TO_BE_REPLACED

by Dan Merica, CNN, October 9, 2022 MINDEN, Nevada — When former President Donald Trump touched down in Minden, Nevada, on Saturday to campaign for … END_OF_DOCUMENT_TOKEN_TO_BE_REPLACED

by Rocio Hernandez, The Nevada Independent, August 28, 2022 Excitement filled the air during the first day of the school year at Winnemucca Grammar … END_OF_DOCUMENT_TOKEN_TO_BE_REPLACED

The schools may be adapting ahead of a Supreme Court ruling on the use of race in admissions. by The Wall Street Journal Editorial Board, November … END_OF_DOCUMENT_TOKEN_TO_BE_REPLACED

Las Vegas Review-Journal Editorial Board, November 18, 2022 It’s a beautiful day when one of the world’s biggest rock stars talks about the … END_OF_DOCUMENT_TOKEN_TO_BE_REPLACED 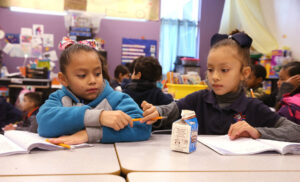 The midterm election has produced additional momentum for providing families with expanded educational options. This is true in Nevada and across the … END_OF_DOCUMENT_TOKEN_TO_BE_REPLACED