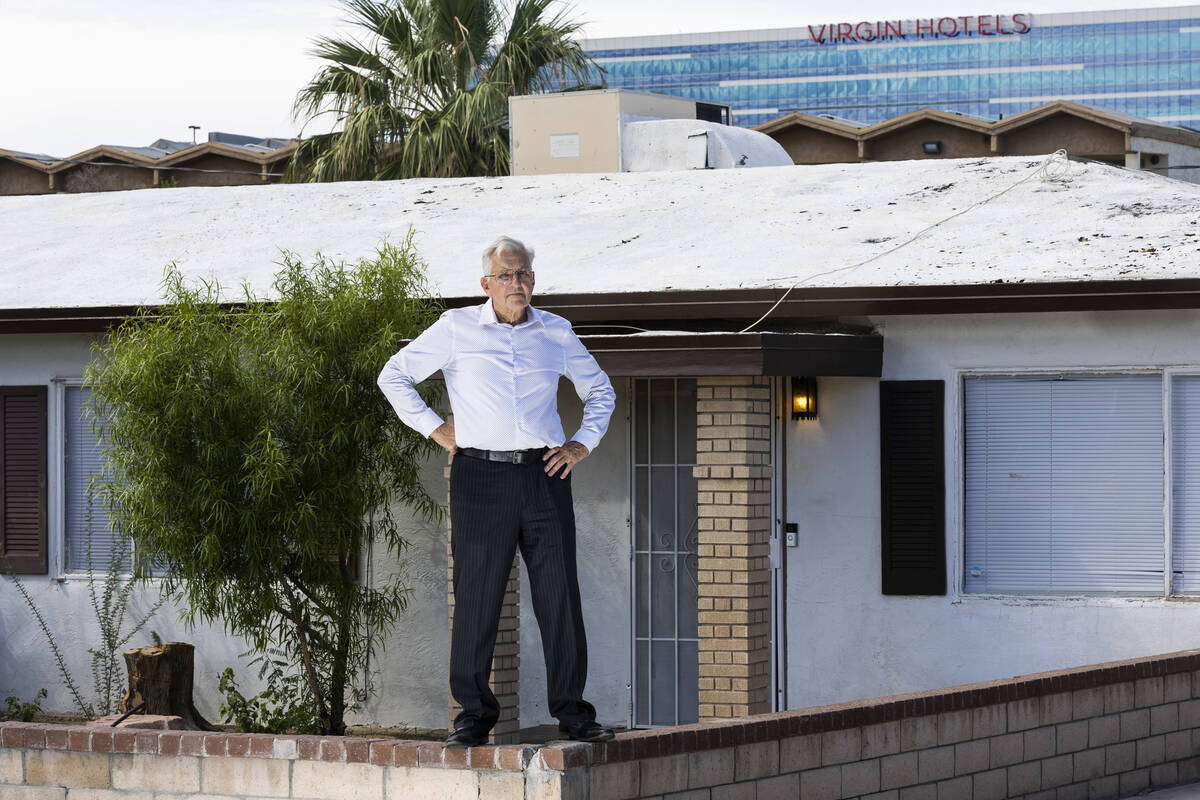 But it doesn’t look as if he’ll be able to follow in his parents’ footsteps, thanks to new rules being implemented by the county.

Uehling’s parents first began lodging visitors in the early 1950s when there were fewer hotel rooms compared to the thousands along the Strip. Today, Uehling is a landlord who depends on short-term rentals that fetch a rate of around $220 a night. He fears without a short-term rental income he’ll need to raise the rent of tenants at his other units to make ends meet.

Property owners seeking to generate income through short-term rentals are fighting the state and Clark County to be allowed to rent their properties through popular online vacation rental companies like Airbnb and Vrbo.

It appears to be an uphill battle.

The Greater Las Vegas Short-Term Rental Association filed a lawsuit on Aug. 2 against the state for the legislature’s 2021 passage of Assembly Bill 363 authorizing the regulation of short-term rentals as well as against Clark County, which is starting the process of licensing a limited number of homes intended for rental next month.

AB363 reversed a ban on short-term rentals in unincorporated Clark County, but set parameters on their placement. Rentals were already legal within the city limits of Las Vegas, Henderson and North Las Vegas.

“Clark County has the most restrictive STR ordinance in the nation,” Flores said in an interview.

“The lawsuit we filed was our last alternative because state and local officials just went too far to the point where their regulations require these homeowners to give up some of their Nevada and U.S. constitutional protections in order to be allowed to operate. And the regulations include some of the highest fines and punishments, of up to $10,000 and jail time, for simply renting for less than 31 (consecutive) days,” she said.

Guests pay an average of $223.68 a night to stay at an Airbnb here, according to a study released earlier this month by London-based online retailer Inkifi. The company contends those are the highest rental rates in the world.

Eight of the world’s most expensive cities for Airbnb rentals are in the United States and, by comparison, the average daily rate for hotels on the Strip and in downtown Las Vegas was $162.60 a night for the first seven months of 2022.

The Inkifi study says there are 11,336 Airbnb rentals available in Southern Nevada.

Flores says that’s about right — but she disputes that Las Vegas Airbnb rentals are the most expensive, citing a study earlier this year by real estate data firm Mashvisor.

Mashvisor reported the leading Airbnb rental rates are in Malibu, California, at $895 a night. Las Vegas rates don’t even make the nation’s top 50 with its rates.

Regardless, Flores says homeowners in Southern Nevada should have the ability to rent their homes and rooms, especially as inflation squeezes the local economy.

Because homeowners work to keep their properties in top shape, she said, they create jobs for maids, handymen, plumbers, landscapers and contractors.

Flores said the association is not opposed to regulation or the taxes and fees that would be applied to licensed rentals. But members say county regulations go too far and are designed to minimize the number of available rentals. By Flores’ calculations, about 80 percent of homeowners who use their properties for commercial lodging would be put out of business under the county’s rules.

Some of the restrictions include:

■ The total number of rentals can’t exceed 1 percent of the housing inventory.

■ Once a pool of eligible prospective licensees is established during a six-month period that would begin Sept. 13, a lottery conducted by a third party would occur to see which homeowners would get short-term rental licenses.

■ Short-term rentals cannot be within 1,000 feet of each other.

■ They also can’t be within 2,500 feet, nearly a half mile, of a resort property or land designated for a resort.

This last restriction means homeowners like Uehling would be forbidden from having a license because his property is within 2,500 feet of Virgin Hotels Las Vegas.

Most short-term rental owners are laying the blame on the resort industry.

“The (Clark County) Commission is anti-small business and anti-entrepreneurs, and the hotels get to dictate what we can do,” Uehling said. “It just shows how the industry is ripping us off.”

Uehling said his short-term rentals are ideal for youth athletic teams, who come to Las Vegas for tournaments, because players can stay under one roof, prepare their own food and not loiter around the Strip.

It also serves families waiting for their new homes to be built and those displaced by disasters like fires and flooding.

County officials say they’re only enforcing mandates established by state law. They say the purpose of enforcing their rules is to prevent noise, trash and an overabundance of vehicular traffic in residential neighborhoods. They say they receive hundreds of complaints from residents who say those staying in nearby rentals are too rowdy.

Portland, Oregon-based Airbnb last year imposed its own ban on parties in the state, threatening to remove violators from its website.

“In advance of Memorial Day Weekend, we want to make clear that those violating Airbnb’s rules in Las Vegas or throughout Nevada risk suspensions or bans from our platform, and even potentially legal action,” Airbnb spokeswoman Ruthie Wabula wrote at the time.

Representatives of the Nevada Resorts Association were reluctant to comment on this story because of the litigation brought by the GLVSTRA against the state and county.

But a Resorts Association spokeswoman said, “The association didn’t engage on the (county) ordinance since it complied with state law.”

“Assemblywoman Nguyen gave the resort hotel lobbyist front-and-center access to speak freely and without any time restrictions in front of the Assembly Revenue Committee where the lobbyist spoke against (short-term rentals) and demanded strict regulations for us,” Flores said. “That was the most shocking thing that happened. I think if the lobbyist hadn’t done her speech through videoconferencing and would have instead shown up in person, they would have rolled out a red carpet for her.”

Las Vegas resident Johnny Dortch, also a member of GLVSTRA, has a different obstacle in his bid to be licensed.

Dortch said the county is requiring him to tie into county-maintained sewer lines except his house, on an acre near Las Vegas Boulevard South and Chartan Avenue, five minutes south of the South Point, has its own well to provide water and its own septic system to manage sewage.

“This isn’t sensible regulation, it’s protectionism,” Dortch said of the county’s rules. “They only care about ensuring the least amount of homeowners get licensed.”

Dortch and Uehling were among the association members who kicked in $5,000 to fund the legal challenge against the state and county.

Dortch said he’s counting on the lawsuit to be successful.

He accused the county of “gaslighting” the community — saying short-term rental problems are worse than they are. He promised a campaign of “controlled chaos” with the county if the lawsuit doesn’t go his way.

“We are not going to take this lying down and I hope the county knows this,” Dortch said. “There are a lot of homeowners that are not going to play this game with them. And if they think that because we’re going into their courts … that that’s going to stop us from being able to run our business with their illegal regulation, they have another thing coming.”

The nation’s 10 highest short-term rental rates for Airbnb rentals, according to Mashvisor, an organization that analyzes real estate investments, with their average daily rates:

by Rocio Hernandez, The Nevada Independent, August 28, 2022 Excitement filled the air during the first day of the school year at Winnemucca Grammar … END_OF_DOCUMENT_TOKEN_TO_BE_REPLACED

Semi Exact in Minden, Nev. StartUpNV, a nonprofit statewide incubator and accelerator for Nevada-based startup companies, has closed a $600,000 round … END_OF_DOCUMENT_TOKEN_TO_BE_REPLACED

Randy Soule leads a tour of the plant. The project's funding is provided by Nevada-based Greater Nevada Credit Union. By Nicole … END_OF_DOCUMENT_TOKEN_TO_BE_REPLACED

by Jason Hidalgo, Reno Gazette-Journal, July 25, 2022 Redwood Materials is doubling down on its battery facility just east of Reno-Sparks once … END_OF_DOCUMENT_TOKEN_TO_BE_REPLACED

When it comes to Nevada’s most-watched political races, the national pundits have it wrong. Both Adam Laxalt and Joe Lombardo should be clear … END_OF_DOCUMENT_TOKEN_TO_BE_REPLACED

President Joe Biden gave an interview to “60 Minutes” that aired Sunday. Among the newsiest items was the president’s pronouncement that the health … END_OF_DOCUMENT_TOKEN_TO_BE_REPLACED

by Frank Miele, Real Clear Politics, September 12, 2022 As I hinted would happen in my previous column, Alaska’s experiment in ranked choice … END_OF_DOCUMENT_TOKEN_TO_BE_REPLACED