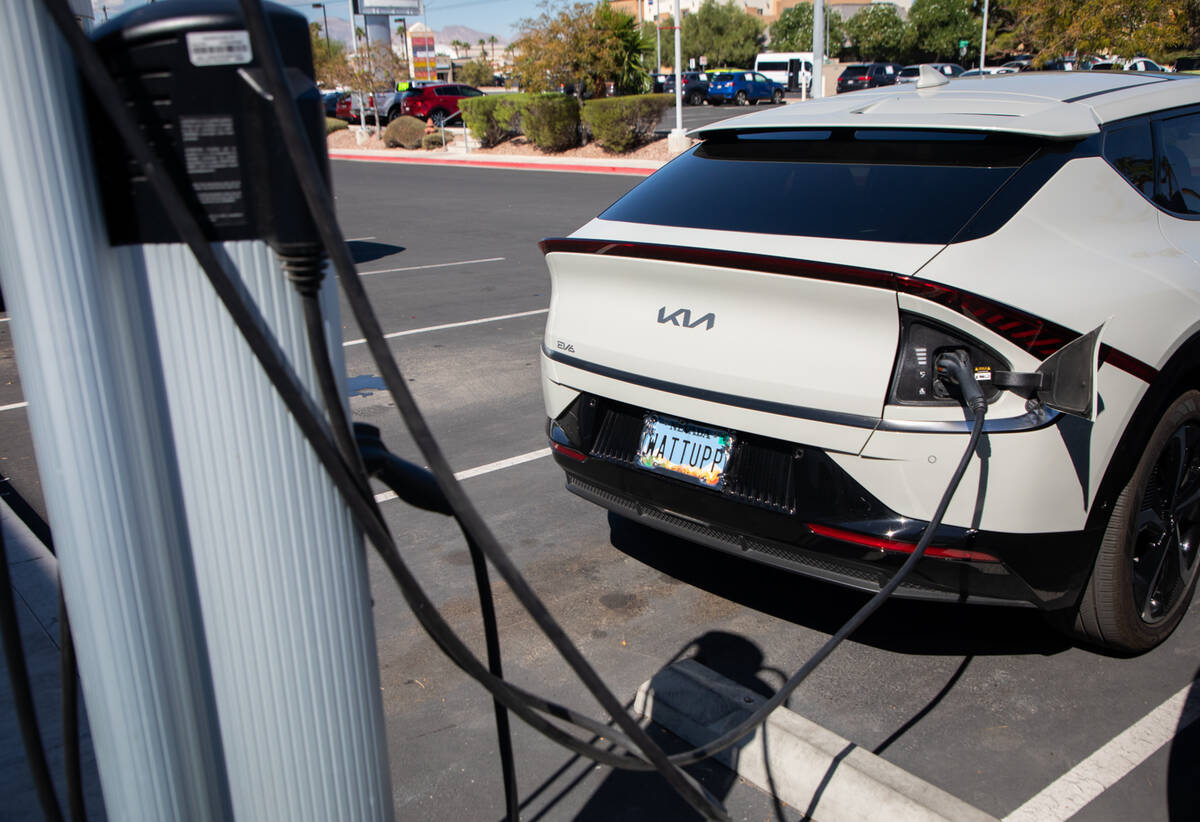 California debuted it in August, New York announced it in late September and Nevada is now considering the same legislation — banning the sale of new gasoline-powered vehicles by 2035.

California made waves in August when it doubled down on its Clean Cars regulations, introducing the Clean Cars II rule that’s meant to prioritize the adoption of zero-emission vehicles and raise emission standards for larger gasoline vehicles, with fines being imposed for every noncompliant vehicle sold. New York then followed by introducing a plan last month to also push for all light vehicle sales to be zero-emission by 2035.

While 16 other states have adopted all or some version of California’s initial Clean Cars regulation, Nevada could be one of the early adopters to take a much stricter approach like California and New York on drastically cutting vehicle emissions. That’s because Nevada is in the early stages of putting forth regulations based on Clean Cars II on light-duty vehicles, despite hesitation from some state leaders and industry insiders.

The Nevada Division of Environmental Protection and Department of Motor Vehicles said it’s started the process for the state to consider adopting Clean Cars II and plans to announce more details in the coming weeks.

“As part of this evaluation, NDEP plans to conduct additional analysis to review the potential costs and benefits of adopting the ACC2 regulations in Nevada and we plan to consider and address comments from all stakeholders prior to bringing the matter before the State Environmental Commission in 2023.”

The Legislative Commission first approved Nevada’s Clean Cars regulation in October 2021. At the time, Gov. Steve Sisolak tweeted that he was “thrilled” about the move.

Starting with the sale of model year 2025 passenger vehicles and light-duty trucks, the regulations require auto manufacturers to follow California’s low- and zero emission vehicle standards. Manufacturers need to submit an annual report on the greenhouse gas emissions from their fleet for each model year after the program starts.

Companies can accrue credits for lower-emission vehicles that meet these standards, and the credits are based on the emission totals from vehicles that are sold. The credits can be bought, sold and traded between companies, which will help the rollout of the first set of Clean Car regulations, according to Andrew MacKay, executive director of the Nevada Franchised Auto Dealers Association.

“Nevada created a unique system leading up to the 2025 implementation date. Being able to bank and credit for being green today and up until that date will help smooth out that curve,” MacKay said.

Even though Sisolak touted Nevada’s set of Clean Cars regulations, he expressed hesitancy over following it up with an even stricter set of standards such as mandating 100 percent of new cars sold be zero-emission vehicles by 2035. But he’s supportive of more people owning EVs.

“I’m not in a position right now where I’d come up with an arbitrary date to ban fossil fuels vehicles,” Sisolak said. “That’s getting a little over our skis.”

Sisolak’s Republican challenger in the governor’s race, Clark County Sheriff Joe Lombardo, has a firmer stance on the issue.

“Sheriff Lombardo does not support California’s Clean Car 2 regulations, would not support adopting it in Nevada, and would absolutely not follow (California Gov. Gavin) Newsom’s regulations,” Elizabeth Ray, spokeswoman for Lombardo’s campaign, said in an email.

‘Do we really want to be California?’

“It could have a positive impact on us because a lot of people in California that don’t want electric vehicles may come to Nevada to buy them,” Corder said.

MacKay said he wants to see the state’s current Clean Cars regulations be put in place before Nevada pushes ahead to adopt more stringent regulations.

“Do we really want to be California?” he said. “We should stick with the (current) standards and see where everything is in three, five, you know, seven years, whatever the time frame is. But to rush in and change to clean cars immediately, I think, is a haphazard approach and dangerous.”

While some worry that Nevada could be moving too fast to regulate the automotive industry for the sake of reducing emissions, others worry the state isn’t moving fast enough.

“We are not on track to meet our climate goals, which shows us that more action is needed,” Christi Cabrera-Georgeson, deputy director at Nevada Conservation League, said. “Cleaning up our transportation, it would help the climate, it would help our health and it helps our economy. So, I don’t think it’s a bad thing to take a more aggressive approach, continue to build on the progress that we made.”

Cabrera-Georgeson said the Conservation League hasn’t taken an official position on Clean Cars II, but Nevada needs to continue its work toward meeting its 2050 goal of net-zero carbon emissions.

“I do think we have to be thoughtful, we have to be realistic about how we implement these policies and really try and take care that we aren’t, you know, creating burdens for people,” Watts said.

NV Energy, the state’s largest utility, has been tasked with helping to create an EV-friendly ecosystem. The company plans to allocate more than $384 million toward its transportation electrification plan to put EV charging projects throughout the state over the next two years.

“The (Infrastructure Investment and Jobs Act) and the (Inflation Reduction Act) and also just some of the Clean Car rulings that are in California, or in Nevada, are really just accelerating the deployment or the acquisitions of electric vehicles,” said Marie Steele, the vice president of electrification and energy services at NV Energy.

The number of EVs on the road is increasing in Nevada with a 7.8 percent increase in sales from June 2021 to June 2022, according to the Nevada Franchised Auto Dealers Association. It’s reported that EVs make up 7.9 percent of the state’s vehicle market as of the second quarter of 2022. At the end of 2021 there were 17,380 EVs registered in Nevada, and in the United States, there were 1.45 million registered EVs, according to data from the U.S. Department of Energy.

Corder of Findlay said dealerships are in favor of getting more environmentally friendly vehicles on the road. But they’re skeptical of imposing a ban on the sale of new gasoline-powered cars since there are concerns the infrastructure around charging stations and lithium production likely won’t be ready by 2035.

“We’re just a little skeptical on things that are being forced into the marketplace by the government that are not consumer driven,” said Corder. “The vast majority (of consumers) are still looking for gas cars.”

by Elko Daily, October 27, 2022 Nevada Copper announced that it closed a restart financing package with its key financial partners on Oct. 28. The … END_OF_DOCUMENT_TOKEN_TO_BE_REPLACED

Lilac Solutions, a lithium extraction technology company in Fernley, NV announced on October 19, 2022, that they were selected to negotiate a $50 … END_OF_DOCUMENT_TOKEN_TO_BE_REPLACED

by Dan Merica, CNN, October 9, 2022 MINDEN, Nevada — When former President Donald Trump touched down in Minden, Nevada, on Saturday to campaign for … END_OF_DOCUMENT_TOKEN_TO_BE_REPLACED

by Rocio Hernandez, The Nevada Independent, August 28, 2022 Excitement filled the air during the first day of the school year at Winnemucca Grammar … END_OF_DOCUMENT_TOKEN_TO_BE_REPLACED

The schools may be adapting ahead of a Supreme Court ruling on the use of race in admissions. by The Wall Street Journal Editorial Board, November … END_OF_DOCUMENT_TOKEN_TO_BE_REPLACED

The latest shakedown is a new fund to pay poor countries for supposed damage caused by Western use of fossil fuels. by The Wall Street Journal … END_OF_DOCUMENT_TOKEN_TO_BE_REPLACED

Las Vegas Review-Journal Editorial Board, November 18, 2022 It’s a beautiful day when one of the world’s biggest rock stars talks about the … END_OF_DOCUMENT_TOKEN_TO_BE_REPLACED