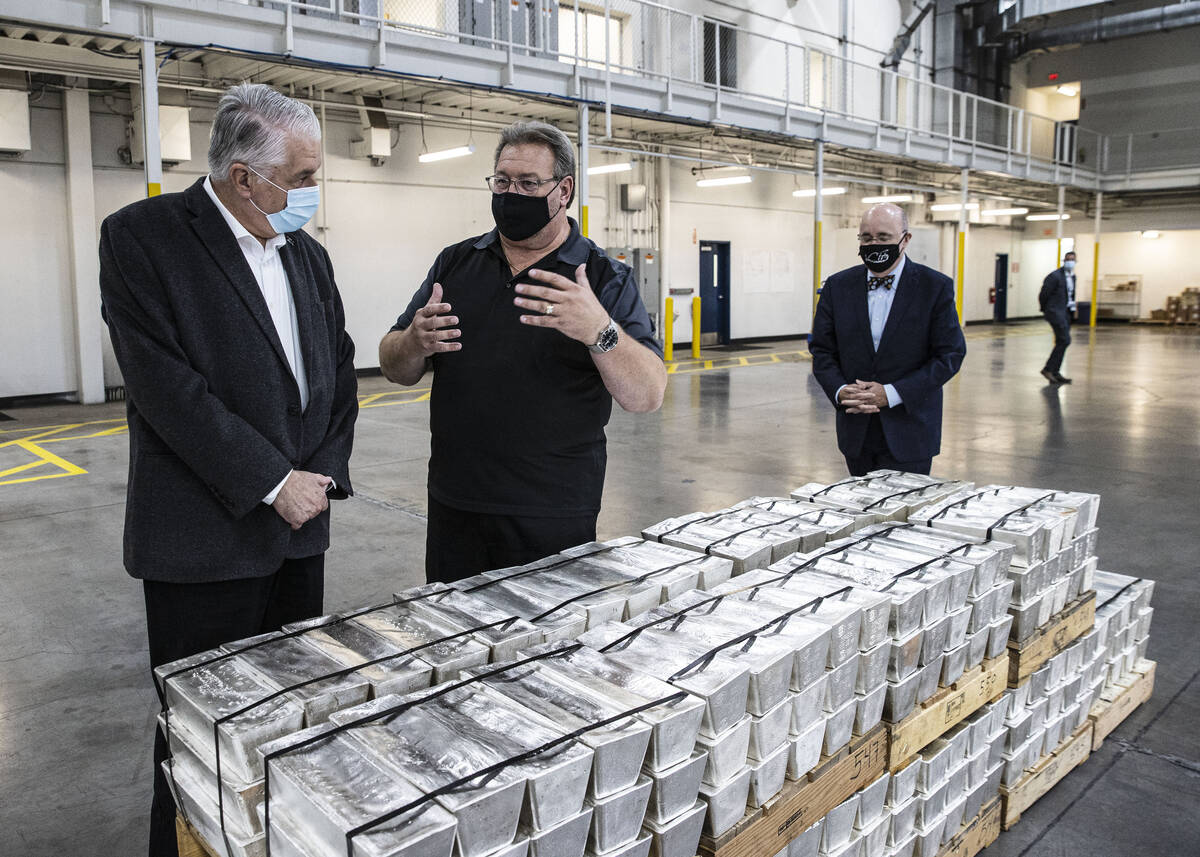 The governor said he supports efforts to bring more manufacturing jobs to Nevada after the tour at Sunshine Minting.

Sisolak’s visit to the 142,000-square-foot facility was part of a weeklong tour of manufacturers and distribution facilities for his “Jobs + Workers Week,” meant to highlight Nevada’s economic recovery from the effects of the coronavirus pandemic. He also visited a distribution facility for beauty retailer Sephora and a roundtable with unions like the AFL-CIO, among other stops.

Sisolak credited a tax abatement and the Governor’s Office of Economic Development for attracting large warehouse operations and manufacturers, like Sunshine Minting, to the state. The minting manufacturer supplies silver bullion and collectibles to sovereign governments around the world.

“We’ve got a lot of features that make Nevada, and Southern Nevada in particular, an attractive environment to relocate in,” Sisolak said. “When you see this — it’s 150 people working in there. It’s open seven days a week, 24 hours a day and they’re going to expand. The abatements helped them come, so it’s money well spent.”

Sunshine recently received approval for an abatement — a reduction or discount on tax liabilities — on its Henderson facility that is estimated to be about $368,880 over 10 years. The company is moving its corporate office from Coeur d’Alene, Idaho, and expanding operations.

“This is a diversification of Nevada that we’re working towards achieving,” Sisolak said. “I wish we could just get more of them. I mean, they’re great jobs, they’re high-paying jobs, and they’re not as reliant on the tourism industry so it’s terrific.”

Sunshine employs 125 people in Southern Nevada and with this expansion would hire an additional 75 to 100 employees in the next two years, the company said. The average hourly wage is $21.38.

Tom Power, Sunshine’s president and CEO, said the company first purchased a satellite facility in Henderson in 2009, but it quickly grew. Company leadership saw the value in moving its operations to the Las Vegas area because it shortened the supply chain with its proximity to Los Angeles, and rail and airplane shipping access. They also had a larger hiring pool to draw from in Las Vegas than in Idaho because of that state’s low unemployment.

“Las Vegas is a 24-hour town (and) we run 24 hours a day, 12-hour shifts,” Power said. “It was easy to find people that are OK with that because the lifestyle down here is built on that.”

Expanded industrial jobs may require workers with more skill. At Sunshine Minting, more than half of the factory floor jobs have on-the-job training but still others require previous industrial experience to operate machinery such as forklifts and presses.

Sisolak said upskilling the labor force will ensure that any companies coming to Nevada can have the workforce they need to operate.

“We need to do more training at the apprenticeship level for the skilled workers,” he said. “These aren’t just regular nonskilled or low-skilled people, these are people that are working on presses there.”

A lithium battery recycling company headed by a former Tesla executive was approved for a $105.6 million tax abatement for its plan to expand a … END_OF_DOCUMENT_TOKEN_TO_BE_REPLACED

by Elko Daily, October 27, 2022 Nevada Copper announced that it closed a restart financing package with its key financial partners on Oct. 28. The … END_OF_DOCUMENT_TOKEN_TO_BE_REPLACED

Lilac Solutions, a lithium extraction technology company in Fernley, NV announced on October 19, 2022, that they were selected to negotiate a $50 … END_OF_DOCUMENT_TOKEN_TO_BE_REPLACED

by Dan Merica, CNN, October 9, 2022 MINDEN, Nevada — When former President Donald Trump touched down in Minden, Nevada, on Saturday to campaign for … END_OF_DOCUMENT_TOKEN_TO_BE_REPLACED

Election Day matters less than it used to. Unless the GOP adapts, it is doomed to keep losing. by Arthur Herman, The Wall Street Journal, December … END_OF_DOCUMENT_TOKEN_TO_BE_REPLACED

Vance: ‘So long as Republicans lose so badly in the small dollar fundraising game, Democrats will have a massive structural advantage’ by Megan … END_OF_DOCUMENT_TOKEN_TO_BE_REPLACED

Of all the states or counties where you’d least expect to find allegations of Republican-led voter disenfranchisement, Clark County is at the top of … END_OF_DOCUMENT_TOKEN_TO_BE_REPLACED