Home » Las Vegas’ economy is booming, but 70K jobs have yet to return 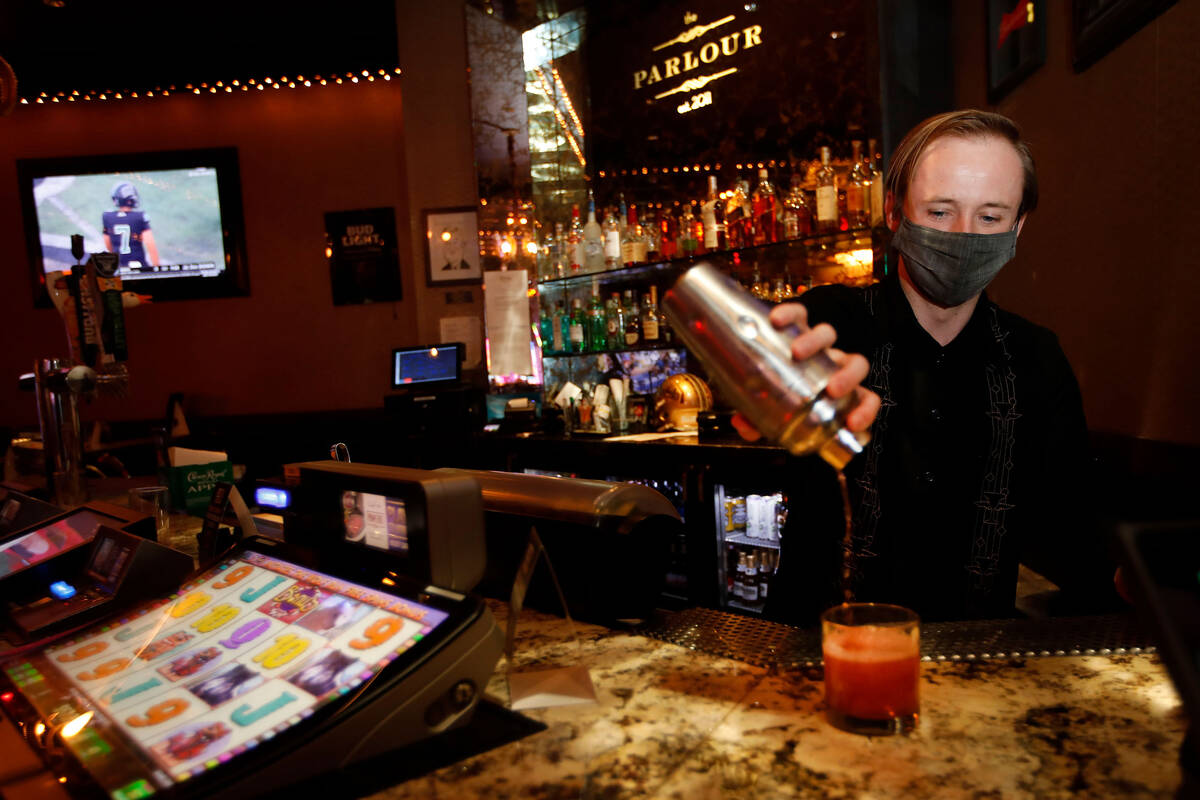 From the return of big concerts to crowded resorts to record levels of gambling revenue, signs of Las Vegas’ economic revival are hard to miss these days.

But even as the state’s economic backbone has surged back to life, the workforce that supports it has yet to see that same rebound.

In July, Las Vegas had the nation’s highest unemployment rate among major metro areas for the second straight month. A large chunk of that can be attributed to the slow rebound of hospitality and leisure jobs that employed more than a quarter of the valley’s workforce before the COVID-19 pandemic hit.

Meanwhile, gaming companies are in the midst of a historic stretch. July marked the fifth straight month that statewide gaming win topped $1 billion, the first time that’s happened since 2008.

Ricardo Arellano is among those still waiting.

The 42-year-old North Las Vegas resident said he began working at Gold Coast as a cook helper in 2013 and was promoted after a few months to his most recent position as a dual stock clerk and receiver.

Boyd Gaming Corp., which operates Gold Coast, furloughed and later laid off Arellano from his job last year, he said.

“Right now, it’s really hard,” Arellano said Thursday. “I’ve been applying everywhere and there’s a lot of people applying and it’s kind of hard to get a job.”

Why hospitality jobs haven’t recovered at the same rate as the demand in the tourism industry is complicated, said Stephen Miller, an economics professor at UNLV.

Coming out of the pandemic-induced economic slowdown has some major companies looking at streamlining their workforce and potentially leaning more on automation, Miller said.

It’s also given workers the time and ability to evaluate their own situations, he added.

“People looking for work have discovered that they have power now, more power than they had in the past,” Miller said.

The Right to Return was supposed to help, and it may be too soon to know if it has. The bill, SB386, became law on July 1 and gives certain employees at hospitality and gaming companies the right of first refusal for their old jobs.

Two months into the law, it’s unclear how many people have gotten their jobs back.

The monthly state unemployment rate continued its slow decline in July — down to 7.7. percent from 7.8 percent in June. The Las Vegas Valley’s unemployment rate was 9.4 percent in July. But July employment statistics for Nevada were assessed the week of July 12, not even two weeks after the bill taking effect, said David Schmidt, chief economist with the state’s employment department.

“There’s just not going to be a lot of data on it most likely, unless there’s something really dramatic, which there hasn’t been,” he said.

The Culinary Union threw its weight behind the legislation to help gaming and hospitality workers without a union. Culinary represents about 60,000 hospitality workers in the state, 98 percent of whom were furloughed last year due to the pandemic, spokeswoman Bethany Khan said.

“It’s like peace in your mind. If you’re not back to work yet, your job is there,” said Geoconda Argüello-Kline, secretary-treasurer for Culinary Local 226. She said about 60 percent of Culinary members workers have been rehired: The other 40 percent remain out of work.

All El Cortez members represented by the Culinary Union were offered their jobs back, and “the vast majority have come back,” he said. Some of those who declined to return cited COVID-19 concerns, Wiesberg said.

Now, he is looking to expand beyond pre-pandemic levels by hiring for 40 positions. But finding people has been difficult.

“Just as an example, we’ll reach out to 10 people on Indeed that have applied for a position,” Wiesberg said. “We’ll have them all come between a one-hour window, (let’s) say we’ll say, ‘Come between 2 and 3 on Wednesday.’ And we’re lucky if two show up. That’s been since we reopened, basically, it’s been about that level.”

South Point owner Michael Gaughan echoed those hiring difficulties. He said 130 of his 2,200 furloughed employees declined their jobs, and he said unemployment benefits have incentivized people not to work.

Whether the end of the enhanced benefits will drive more people back into the workforce remains unclear. Twenty-six states ended those pandemic-era benefits between May and July. In those states, shifts among hourly workers grew about 2.2 percent, which was just about half as fast as the 4.1 percent growth seen in other states, according to a report from payroll and time-management firm UKG.

Overall employment followed a similar trend among those states, falling 0.9 percent in states that ended the benefits early, according to data from payroll company Homebase. In the states that kept the benefits, employment rose by 2.3 percent. Nevada’s enhanced unemployment benefits expired Saturday.

“Preliminary evidence suggests that doing away with the extra benefits, as some states had done, didn’t have a huge effect on the number of people looking for work,” Miller, from UNLV, said.

Just wants his job back

Arellano just wants his old job back. The Gold Coast worker was one of eight people as of last week to file complaints with the Nevada Office of the Labor Commissioner alleging Right to Return violations.

Labor Commissioner Shannon Chambers said last week that seven of the eight complaints were closed. Her office had received roughly 30 to 40 calls from people asking about the law from July 1 to Aug. 30, she said.

The office closed three of the complaints because the complainants failed to ask their employer in writing for their job back and wait 15 days for a response, which the law requires before someone can file a complaint with the office or pursue civil legal action.

Chambers called the limited inquiries to her office an encouraging sign of the law’s effectiveness.

“That tells me that either employers brought people back, or they’re handling this very appropriately based on their collective bargaining agreement or their employee agreement,” Chambers said.

The law applies to hospitality and gaming employees whose jobs aren’t covered by a collective bargaining agreement. The volume of such agreements at Nevada hotel-casinos “probably eliminates a lot of that population.”

Arellano received his complaint closure letter with that explanation on July 29.

He said he’s sent a letter requesting his job back to his boss and human resources. Arellano added that he found a Boyd Gaming booth at a recent job fair and expressed his desire to return to work. He also came across an online job ad from Boyd on July 26 for a similar position to his old job; he’s applied three times without a call.

“I’m trying to go back to work. I’m not trying to collect unemployment. I’d even take my job if I get a pay cut,” Arellano said Thursday. “Still, I’d rather work than be home.”

A Boyd spokesman did not return multiple requests for comment.

Jeremy Aguero, an economist and principal at Applied Analysis, said that Southern Nevada is at least 18 months away from a full recovery. But what those jobs look like could be quite different, he said.

But as has been the case with projections throughout the pandemic, COVID remains the X-factor that could throw every model awry, Aguero said.

Schmidt, with Nevada’s Department of Employment, Training and Rehabilitation, said he thinks many casino and accommodations jobs will return. He also believes many won’t, if the past is predictive of the future.

Recessions typically cause employers across industries to reassess their business models in an effort to get by, Schmidt said. Permanent job displacement would follow a pattern with past recessions in the state.

The department projected earlier this year that the state will continue to add casino and accommodations jobs. Come summer 2022, the state would remain about 35,000 jobs short of its summer 2019 levels, Schmidt said. Nevada is “kind of on track” to match that projection.

“We’re still growing, we’re still gaining, but it’s slow,” Schmidt said, “and it’s not on a pace to fully recover the jobs we had in that industry anytime soon.”

A lithium battery recycling company headed by a former Tesla executive was approved for a $105.6 million tax abatement for its plan to expand a … END_OF_DOCUMENT_TOKEN_TO_BE_REPLACED

by Elko Daily, October 27, 2022 Nevada Copper announced that it closed a restart financing package with its key financial partners on Oct. 28. The … END_OF_DOCUMENT_TOKEN_TO_BE_REPLACED

Lilac Solutions, a lithium extraction technology company in Fernley, NV announced on October 19, 2022, that they were selected to negotiate a $50 … END_OF_DOCUMENT_TOKEN_TO_BE_REPLACED

by Dan Merica, CNN, October 9, 2022 MINDEN, Nevada — When former President Donald Trump touched down in Minden, Nevada, on Saturday to campaign for … END_OF_DOCUMENT_TOKEN_TO_BE_REPLACED

Election Day matters less than it used to. Unless the GOP adapts, it is doomed to keep losing. by Arthur Herman, The Wall Street Journal, December … END_OF_DOCUMENT_TOKEN_TO_BE_REPLACED

Vance: ‘So long as Republicans lose so badly in the small dollar fundraising game, Democrats will have a massive structural advantage’ by Megan … END_OF_DOCUMENT_TOKEN_TO_BE_REPLACED

Of all the states or counties where you’d least expect to find allegations of Republican-led voter disenfranchisement, Clark County is at the top of … END_OF_DOCUMENT_TOKEN_TO_BE_REPLACED